On December 1, 2017, Watson Medical DevicesCo., Ltd. and ten surgical directors and professors from Handan City, HebeiProvince jointly held a product review meeting of Watson minimally invasiveendoscopy. Through the form of animal experiments, we experienced the Tulong I,Tulong II and Yitian series of endoscopic cutting stapler products of Watson,and made in-depth discussion about the appearance, performance and feel of theproducts.

Ten teachers cooperated with each other tocomplete laparoscopic subtotal gastrectomy, left lateral lobectomy andgastrointestinal anastomosis. During the operation, the vital signs ofexperimental pigs were stable, the operation process was smooth, no obviousbleeding and anastomotic leakage were found.

The teachers used Tulong II Seriesendoscopic cutting stapler, blue nail and green nail to cut and anastomose thegreat curvature of the stomach. The cutting process was smooth, the handfeeling of the hitting rod was good, B-shaped nail was uniform and beautiful,and no obvious bleeding was found at the anastomotic opening. Zheng, directorof the second hospital of Handan City, said that the quality and feel of Huasenstapler products are comparable to those of pure imported products, whileHuasen products have more price advantages, and proper use can greatly reducethe treatment costs of patients.

In order to verify the hemostasis effect ofHuasen stapler, the directors decided to operate the knife by director Sun ofAffiliated Hospital of Hebei University of engineering, and to use thecombination of Tulong II Series endoscopic stapler and white nail warehouse tocarry out left lateral lobectomy. There was no obvious bleeding at the cuttingedge of the liver lobe, and there was no rough concave and convex on the cuttingplane. The growth time of the experimental pig is shorter and the liver leavesare more delicate. Under such extreme environment, huasentulong II Seriesendoscopic stapler can still fully complete the cutting and anastomosis,without crushing the surrounding liver tissue, and the nails are even andbeautiful. It is also the proof of the excellent quality of huasentulongproducts.

Next, Su, director of the first hospital ofYongnian County, Handan City, used the Huasen three row stapler to performgastrointestinal anastomosis in experimental pigs. Watson's three row staplerhas been a very mature product. After tens of thousands of operations, it hasexcellent performance in quality, hand feel and nail performance. After theoperation, director Sun observed that there was no bleeding or leakage at theanastomotic opening. The round anastomotic opening was very beautiful and thesize of the internal cavity was appropriate. At the same time, the tensile testis done, and the tensile strength of the joint is satisfied.

The ten directors and professors were fromthe Affiliated Hospital of Hebei University of engineering, the first hospitalof Handan City, the second hospital of Handan city and the first hospital ofYongnian County of Handan city. The teachers put forward their own opinions onthe products of Watson stapler. Watson will also listen to the improvementopinions of the teachers, gather ideas on the research and development road ofstapler, make its own product characteristics while ensuring the excellentquality of the products, and contribute a positive force to the development ofdomestic surgery. 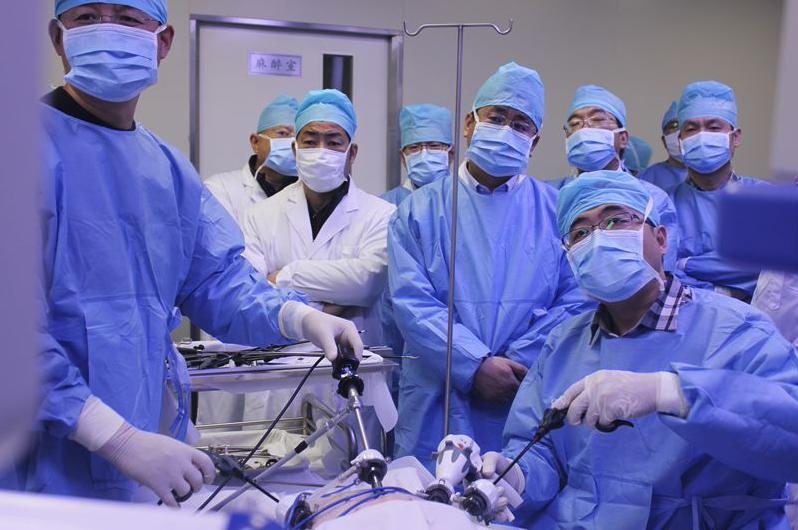